On October 6th, when the Wisconsin Badgers take on the Nebraska Corn Huskers, we will be competing against a Nebraska-based sports talk radio station 93.7 FM The Ticket.

The goal is to see which station (team) can raise the most money for the Wounded Warrior Family Support Foundation. Whichever radio station raises the most money wins the 2018 Freedom Trophy Challenge! Please join us in supporting these wounded heroes and their families by donating here!

We will be live at The Red Zone Madison two hours prior to game-time for our Pre-Game Bash collecting donations alongside the folks from Karben4 come on down and show your support! 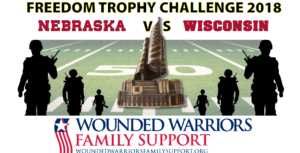 Relief Pitcher Beer of The Week

Send this to a friend