|In Badgers
|By Zach Heilprin

Days after the NFL Combine concluded in Indianapolis, the Wisconsin football team held its Pro Day inside the McClain Center in Madison. It was an opportunity for several guys to show off their stuff to NFL scouts and several took advantage of it.

Plenty of eyes were on linebacker Leo Chenal, too. After passing on doing the bench press at the combine, Chenal threw up 34 reps of 225 pounds. That would have easily been the top mark in Indy for a linebacker and his 20-yard shuttle time of 3.94 seconds would have been the best of any player at the combine.

Not a single number is lower than 94th percentile among LBs https://t.co/UrO4xf4LWm

Meanwhile, cornerback Faion Hicks also had a nice showing. He had the fastest 40-yard dash time at 4.37 seconds and finished second to Nelson with a 3-cone time of 3.94.

Here are the full results: 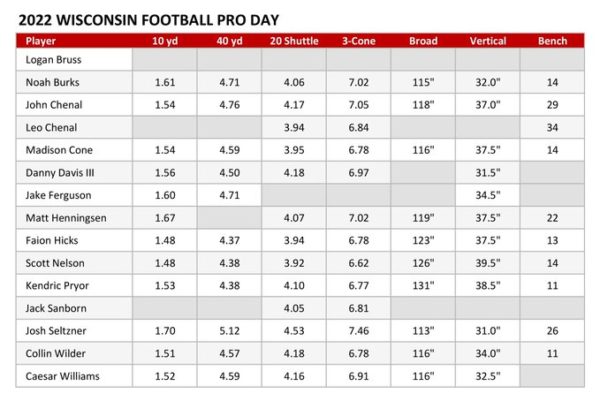